The biography of Imtiaz Dharker strikes by the scope of the global scale. Her activity is spread all over the world. Her exhibitions are organized in the USA, Europe, India, China. Her films are devoted to hot issues. Her poems belong to the world heritage.

Who is Imtiaz Dharker?

Imtiaz Dharker is a British poetess of Pakistani origin. She is also an artist and documentary filmmaker.

When was Imtiaz Dharker born? 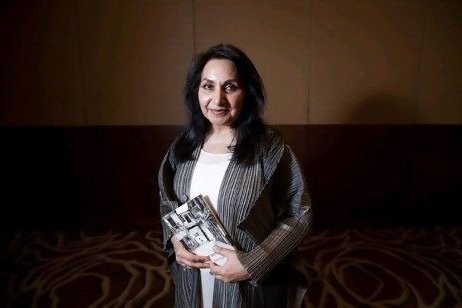 Imtiaz Dkharker was born in Lahore (Pakistan) on the 31st of January, 1954.

The parents of Imtiaz Dharker moved from Pakistan to Great Britain before she became one-year-old. The future poetess grew up in Glasgow.

Imtiaz Dharker finished the University of Glasgow. Her qualification is M.A in English Literature and Philosophy. 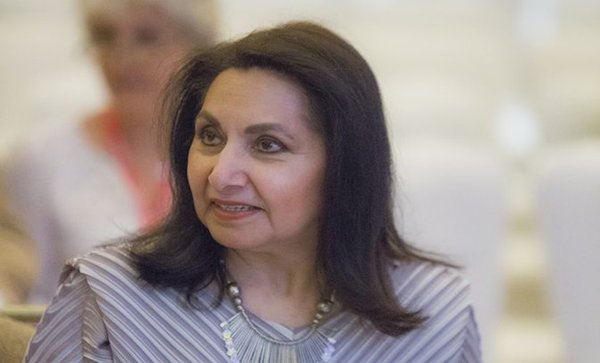 Dharker was married to Simon Powell, the founder of the organization “Living poetry”. He died in October 2009 because of cancer, with which he had been ill during last eleven years. This marriage played an important role in the biography of Imtiaz Dharker.

Now Imtiaz Dharker divides her time between London and Mumbai. She is popular in Great Britain and India. Her daughter Aysha Dharker is a known actress of movies and television.

Imtiaz is the author of six poetry collections: “Purdah and other poems” (1988); “Postcards from god” (1997); “I speak for the devil” (2001); “The terrorist at my table” (2006); “Leaving Fingerprints” (2009) and “Over the Moon” (2014).  She created illustrations for her poems on her own. Dharker is the poet, whose works enter the compulsory programme of the certification commission of the assessment and qualification Alliance on English (AQA). The first and the second chapters of the section of different cultures of AQA “Anthology” includes her poems “Blessing” and “This room”. Imtiaz Dharker together with Carol Ann Duffy and Gillian Clarke entered the jury of the poetic award of Manchester of the 2008. In the 2011, she was admitted to the place of a research assistant to the Royal literary society. In the same year, she was awarded the prize Cholmondeley, which Society of Authors confers. In the 2011, together with Glyn Maxwell she entered into the jury of the Foyle Young Poets of the Year Award. In the 2012, Dharker was nominated for the prize “Poet of the Parnassus” at the international festival, which took place in the framework of the cultural Olympics 2012 – the largest poetry festival ever having been held in the territory of Great Britain, having included poets from all countries- participants of the London Olympics. From January to March 2013, she was a poet in the residence of the Cambridge University library. She was awarded the Queen’s Gold Medal for Poetry in the 2014, which became one of the brightest events in the biography of Imtiaz Dharker. 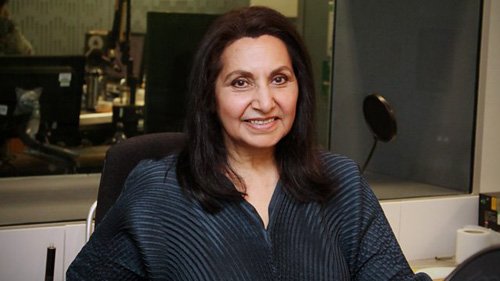 Home, freedom, travel, geographical and cultural offset, the conflict within the society and the gender policy are the main themes of the Imtiaz Dharker poetry. All books of the author were edited by the publishing office Bloodaxe Books. In her poems, the poetess touches on various aspects of life of the Muslim woman, who, in Dharker`s opinion, experiences injustice, oppression and violence being fed by the tradition of wearing of a purdah, a niqab, a paranja.

Imtiaz Dharker is also a documentary filmmaker, a scriptwriter and a director of more than one hundred films and audiovisual projects devoted to education, protection of reproductive health and social aid to women and children. In the 1980, the poetess’s short film received the award “Silver Lotus”.

What is Imtiaz Dharker’s religion?

The author calls herself a Scottish Muslim Calvinist. Such seemingly impossible combinations are typical for her literary and pencil works. In her poetry, Dharker has often written about tensions between secular and religious cultures.

The poet was married to Simon Powell known as the founder of Poetry Live, a series of annual events in many places of the UK where poets read their works to school children.

When did Imtiaz Dharker’s husband die?

He fell victim to cancer in 2009, after more than ten years of struggling with the illness.