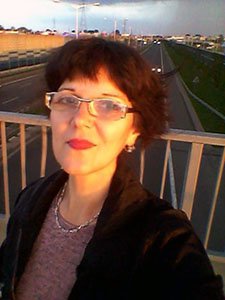 Glad to “see” you here! I’m Emily, a life-long poetry fan and a co-author of this blog. I started it in 2013. Later, my friend Catherina joined me, so today both of us contribute to the project.

Why did I decide to choose such an “unfashionable” and not commercial topic as poetry? That’s a long story!

It all started when I was three. My preschool teacher (I still remember her hair color – bright red!) read us a poem. Later in life, I’ve often wondered what was it that made her choose this very poem (which was Robert Frost’s “Fire and Ice”) for a three-year-olds. And, also, whether it was officially suitable for the age group. Even now, I can only guess.

By three, I had heard quite a few poems. I knew several by heart. But this one was different. Somewhere deep in my heart, I felt: this was the first real one I had heard. All those that had been earlier just didn’t count. This one was complicated, magical, and mesmerizing. The strange words coming in strange sequences were waiting to be deciphered, and I was eager to decipher them.

Some of the words stuck in my memory at once. They haunted me. As soon as I came home that day, I demanded that this poem is read to me again and again until I knew it all by heart.

But that wasn’t the end of the story. In a couple of days, I made up my own poem and asked my mom to write it down for me. As she was a journalist, it was only natural for her to like my “interest in literature” and take it seriously. I remember her holding a small notebook with a yellow duckling on the cover and writing down my “poem.”

I remember the first criticism, too. Mom said, she found my poem splendid (which didn’t surprise me at all!) but mentioned: “These two words have been borrowed from “Fire and Ice,” and here there’s a whole line from this poem. You need to replace these with your own words.”

And now, this WAS a surprise.

It was something I hadn’t expected. I thought: “Why can’t I do it? After all, I’ve borrowed the best words from Frost’s poem, and my poem is great, too. They fit so well! Frost certainly wouldn’t mind, he would like my poem with his line. And, after all, he’s dead, so he won’t mind anyway. It’s just nonsense that these beautiful words can’t be reused!”

The following couple of years were in a way horrible for my family because I made up a lot of stories and poems and was constantly asking my parents to write them down. Eventually, I was able to do it myself.

Several years later, though, a new obsession entered my mind – I started to dream about becoming a doctor. My interest in writing poetry began to get weaker. And yet, I’ve stayed enthusiastic about literature, especially poetry, ever since – if not about writing, but at least about reading. Today, I love it as much as traveling and meeting new people (which are the things I adore!).

I pursued a career in medicine and began working as a cardiologist in a hospital in Washington in 2010. As my job has had nothing to do with writing or literature, at some point, I started this blog as an outlet for my interest in poems.

Since, 2013, I’ve been writing about poems and authors that inspire me. This blog let me meet one of my dearest friends and another poetry fan – Catherina. Her interest in poetry also isn’t a matter of profession – it’s a matter of passion. So, now, we both write articles about poems and poets and share them in this blog.

If you have any questions, you are welcome to contact us via e-mail: