Charles Bukowski was an American writer, poet, novelist and journalist. He was a representative of the so-called “dirty realism”. His European popularity left behind his American fame. 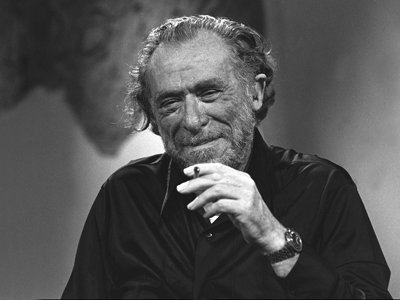 Charles Bukowski was born in Andernach, Germany. When he was three years old, his family moved to the United States. He grew up in Los Angeles, traveled a lot, but spent most of his life in San Pedro.
His family was constantly strapped for cash. Therefore, his father had to work hard, so the son could study at school. The father often beat the mother and little Charles for the slightest blunder. That fact significantly influenced the biography of Charles Bukowski.
The boy got into reading and began to write to escape from reality. In the 1940, the father discovered his manuscript and threw them away. This incident brought Bukowski to leave home. Thus, he began wandering through life, he drank much, worked at low-paying jobs, was expelled from the College, moved constantly from place to place.
That lifestyle led the writer to a hospital bed.

Bukowski became the author of more than two hundred short stories included in sixteen books, six novels and of more than thirty poetry books.
The first literary experiences of Bukowski related to the 1940-s. However, he began to write seriously only in adulthood — from the mid-1950- s. Thanks to the poems, which appeared in the pages of the small poetry journals published primarily in California, Bukowski became a prominent figure of the literary underground of America.
He gained recognition in the late 1960-s as the author of the column “Notes of a Dirty Old Man”, which appeared in the Los Angeles newspaper “Open City”. In those years, Bukowski finally entrenched the image of a troublemaker, a wencher and drunkard, which he created in his verses and prose. Outside the United States, people learned about the writer after the publication of the novel “Post office” (1971), which got a great popularity in Europe. The American fame was won by Bukowski only in the 1987, when the movie “Boozer” was shown in the United States. The film, partially based on the biography of Bukowski, was created by Barbet Schroeder.