Elisabeth Barrett Browning was an English poet of the Christian mystical inclination and the wife of the poet R. Browning. Her creative work refers to the Victorian era. 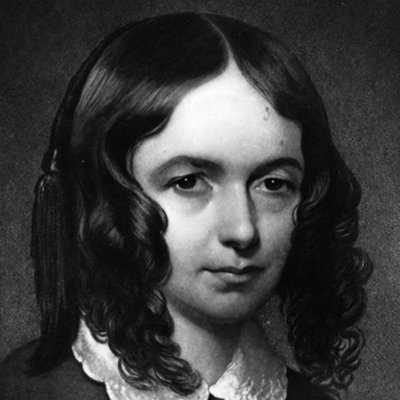 Elizabeth Barrett was born in the family of the West Indies planter. The education received in childhood had a significant impact on the biography of Elisabeth Barrett Browning. Even in childhood years, she read the philosophical works, studied the Greek, French and Latin languages.
In the 1835, the family moved to London. In the 1838, due to deteriorating health, she went to the town of Torquay (County of Devonshire). However, after a strong nervous breakdown after the death of her beloved brother, Edward in the 1841, she returned to London, where she lived a sequestered life.
On the 12th of September 1846, a significant event happened in the biography of Elisabeth Barrett Browning. She secretly got married to the famous poet Robert Browning. They soon left for Italy. Having lived for some time in Pisa, the spouses moved to Florence, where in the 1849, their son was born.
Elizabeth Browning died in her husband’s arms in Florence. She was buried there in the English Cemetery.

At the age of 10, Elizabeth composed poems for family holidays. And in the 1820, she wrote her first poem “The Battle of Marathon”, which was published through the efforts of her father. In the 1826, the collection of young poetess “An Essay on Mind and Other Poems” was published, and in the 1833, she translated the Aeschylus tragedy “Prometheus Bound”.
In the 1838, her collection “The Seraphim and Other Poems” was published, after which her name became widely known to the reading public.
In the 1843, her poem “The Cry of the Children” appeared. It was devoted to child slavery.
The peak of the popularity of Elizabeth Browning happened in the 1850-s, when one of her most famous works “Sonnets from the Portuguese” was published. It was a collection of amatory verses. Her novel in verse “Aurora Leigh” (1856) sharply outlined the problem of social injustice. The works “Casa Guidi Windows” (1851) and “Poems Before Congress” (1860) were written under the impression of the Italian revolution of the 1848.