Whosever room this is should be ashamed!
His underwear is hanging on the lamp.
His raincoat is there in the overstuffed chair,
And the chair is becoming quite mucky and damp.
His workbook is wedged in the window,
His sweater’s been thrown on the floor.
His scarf and one ski are beneath the TV,
And his pants have been carelessly hung on the door.
His books are all jammed in the closet,
His vest has been left in the hall.
A lizard named Ed is asleep in his bed,
And his smelly old sock has been stuck to the wall.
Whosever room this is should be ashamed!
Donald or Robert or Willie or–
Huh? You say it’s mine? Oh, dear,
I knew it looked familiar!

With Shel Silverstein, it is quite simple to imagine how a room, even hardly resembling a place for a living, can look like. “Messy Room” is the essence of everything that can be combined into the word “untidiness” or “indifference” to yourself and your things. Emphasizing this untidiness and indifference, the author even refuses to use a rhyme which you normally expect to see in the poem.

The composition of the poem might resemble a burger. The internal “filling” is a descriptive part, while the beginning and the end of the poem are comments. The very first words already create a certain mood: “Whosever room this is should be ashamed!“. But what kind of mood is this? What feeling is embedded in these words? Technically, it looks like a preaching, but in reality these are formal words which carry no true feeling. And it is exactly the third part of the poem, beginning with the literal repetition of the first line (“Whosever room this is should be ashamed!“), which depreciates them.

The author seems to be saying “yes, it’s terribly sloppy,” and is ready to paint this “horribly” with the brightest colors, but in reality he considers the room only as a reflection of his own inner conflict, self-neglect and the lack of self-care. The words commenting on the room (1 and 3 parts) are most likely cited, and these are the words of some adult. No wonder that most often “Messy Room” is perceived as a poem called “A Teenager’s Room”.

Such detailed description of pictures and local images in the room, like the ones the author suggests, creates quite bright impression to make the reader’s brain automatically fill this imaginary room with various smells. This is a specific smell of raw, undried things, and also the sour smell of worn laundry and socks. And not just socks, since “And his smelly old sock has been stuck to the wall“.

The images in the poem make it possible to see not just the general picture of the outrageous disorder, but many small pictures described in all tiny details. “His sweater was on the floor” or “His raincoat is there in the overstuffed chair.” But is the person walking in the room really experiencing stress? Or is he looking around with interest, dramatically shaking his head trying to condemn the disorder? Most likely, this is just histrionics, deliberateness, unnaturalness.

The author does not really condemn the disorder, he simply states it. And it is quite possible that this statement acts as a kind of “appeal” warning against any future claims towards him.

At first glance, the only possible reaction to the room might be censure, which is what the author demonstrates. However, if you take a closer look the situation changes. The author – if we discuss his room – avoids censure, reflecting “necessary” negative reaction.

Does he ask for help? No. Like many teenagers or people experiencing an internal crisis, he does not know that he can ask for help or he is not sure that he can get this help. But what might the hero of this poem need if not help, then? Most likely, the acceptance. The willingness to accept the fact that a person might experience such harsh things inside him that external conditions simply do not matter. External “horrible” pictures are just a reflection of the inner struggle and self-misunderstanding.

However, there is another interpretation of this poem. And the essence of that interpretation is hypocrisy. It is as if the father condemns his teenage son, but at the same time he has the same disorder in his own room. And the teenager’s protest against the hypocrisy of adults is a natural reaction at this age. The poem can be considered as a protest of this kind.

This interpretation is reminiscent of the Bible’s moral code which asks us to get rid of the log in our own eye before instructing someone who has a flush-sized flaw.

A teenage crisis or any other difficult life situation is not a reason to condemn a person. After all, it is quite possible that this is our own crisis, our own “room”. And it is not always perfectly clean. 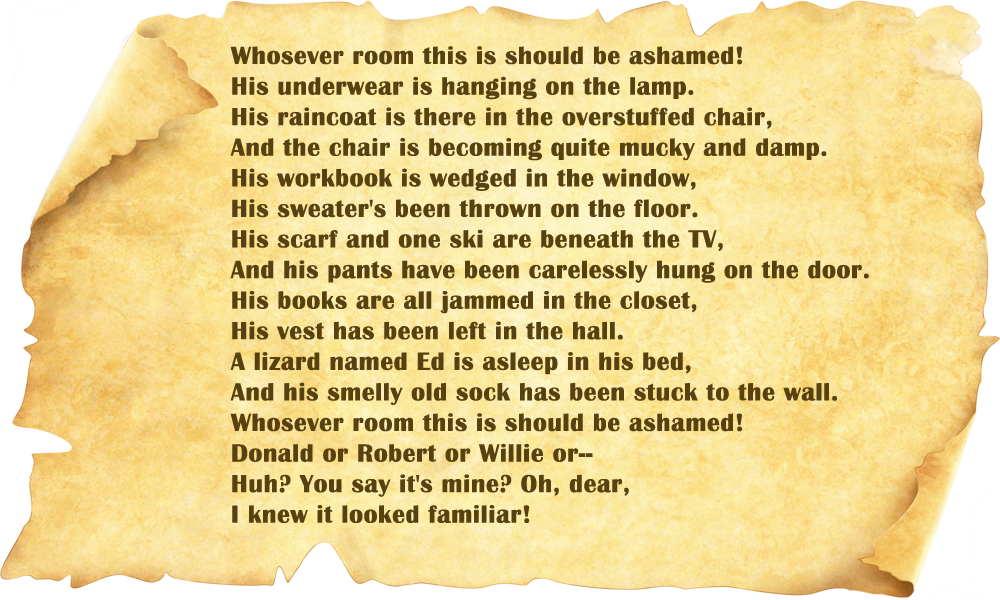