I went down to the river,
I set down on the bank.
I tried to think but couldn’t,
So I jumped in and sank.

I came up once and hollered!
I came up twice and cried!
If that water hadn’t a-been so cold
I might’ve sunk and died.

But it was Cold in that water! It was cold!

I took the elevator
Sixteen floors above the ground.
I thought about my baby
And thought I would jump down.

But it was High up there! It was high!

So since I’m still here livin’,
I guess I will live on.
I could’ve died for love—
But for livin’ I was born

Though you may hear me holler,
And you may see me cry—
I’ll be dogged, sweet baby,
If you gonna see me die.

The poem “Life Is Fine” creates an image of a person full of contradictions and internal conflicts. The author does not introduce the reader to the prehistory, and the first impression is quickly destroyed. This is not a sweet sonnet about nature, and is not at all a platform for thinking about life. This is a sort of chronicles of the failed suicide.

The author in fact offers the reader to follow the path of his hero. And this way, as we begin to understand already from the second stanza, is extremely dangerous. He almost walks along the edge of life, as if trying different ways of ending his contact with reality.

The form of the poem is preserved throughout its entire length. A sequential model with a quatrain, followed by a separate line, outwardly suggests that the author, experiencing some serious problems, seeks to preserve at least some form. Perhaps the cause of the emotional state of the author was some event, about which they say “the world collapsed.” And only the form of the poem as a whole allows the author to support himself in these experiences.

Lengst Hughes invites the reader with him for a walk, and this trip can prove very dangerous for the reader. Yes, for the author, mental suffering is much less significant than the unpleasant sensations of “cold water“, but this experiment can be much less positively completed for the reader. And this is confirmed by the story of another literary work – “The Sorrows of Young Werther”. After all, the author gets rid of his sufferings, passing them on to the reader. Is it worth accepting  this load?

Neither drowning nor a jump from the height were not the cause of the hero’s suicide. Most likely, it was not about a real desire to die. Rather, the author wants to show a person who is still a child, and would like to magically solve a difficult situation, without applying his own efforts to that.

Moreover, the presence of references to baby and love failure in the poem are a kind of appeal to the baby (in the context of the poem it is unclear whether it is a child or a love partner) appear in the momentary experiences of the hero and save him of these experiences.

And in this context it does not at all seem strange that the hero seems to justify himself in the incompleteness of his attempts to kill himself. Because he does not plan anything like that. He communicates with himself and an imaginary baby that way. It is unlikely that he realizes that he is trying to manipulate another person, but this is quite an obvious attempt to cause self-pity. Perhaps, it is this pity that drives him first to the bank of the river, and later – to the roof.

The author returns the reader to the realization of life as a value, only in the end of his poem, his “road“. And this declaration sounds, despite the exclamation marks, dual. On the one hand, the immediate meaning of these words testifies to the recognition of the value of life by the hero. On the other hand, in this statement there is a pattern, as if taken from the lexicon of another person.

And the phrase “Life is fine! Fine as wine! “is a hint of surviving with use of alcohol, which cannot be called a good outcome.

The poem “Life Is Fine” is considered autobiographical. Its author, Langston Hughes, led a more than life-filled emotional experience, and it may very well be that one of these experiences – apparently youthful – was described in the poem. However, the author himself never confirmed the presence in his biography of such a stage as an attempt at suicide. So, most likely, this is a creative attempt to understand the experiences of a person who tries to end his life compulsorily. 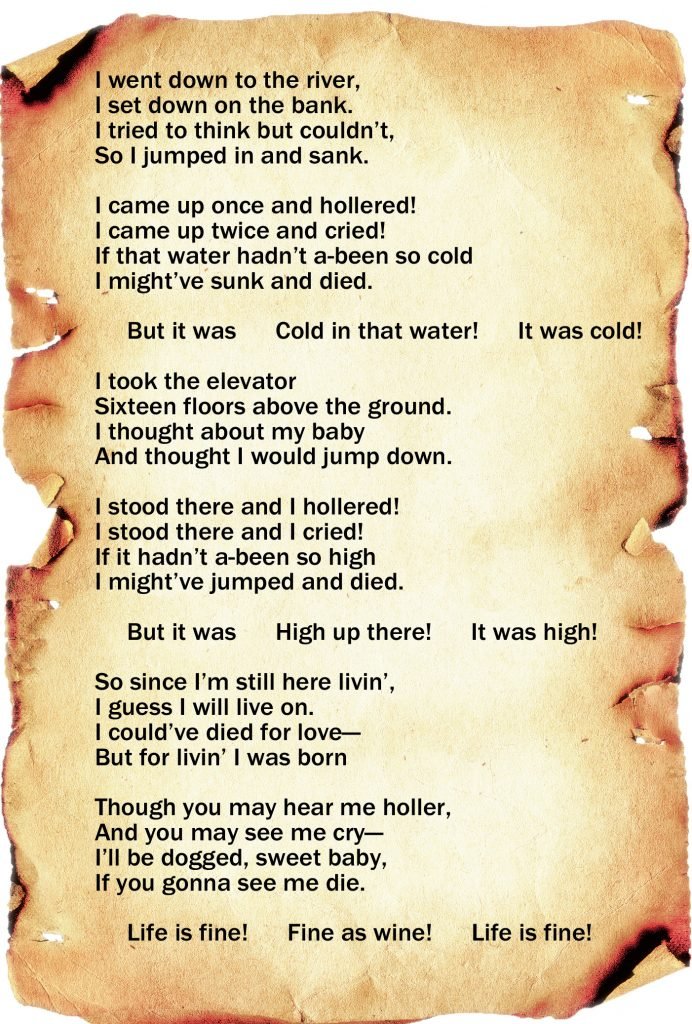