Take this kiss upon the brow!
And, in parting from you now,
Thus much let me avow:
You are not wrong who deem
That my days have been a dream;
Yet if hope has flown away
In a night, or in a day,
In a vision, or in none,
Is it therefore the less gone?
All that we see or seem
Is but a dream within a dream.

I stand amid the roar
Of a surf-tormented shore,
And I hold within my hand
Grains of the golden sand–
How few! yet how they creep
Through my fingers to the deep,
While I weep–while I weep!
O God! can I not grasp
Them with a tighter clasp?
O God! can I not save
One from the pitiless wave?
Is all that we see or seem
But a dream within a dream?

Formally, the poem “A Dream Within A Dream” can be regarded as a sonnet. The truth is that the even and rhythmic form constructed according to the iambic law contains multilevel images characteristic of this author. Thus, the restrained philosophical sonnet turns into a poem filled with passionate surges of meanings that break against routine notions of the world.

The Image of the Sea

Edgar Poe uses the image of the sea more than often. And this multilevel image goes with the author’s soul suffering from emotional torments perfectly well.

The first level of this image used by the author was defined by Shakespeare. This is changeability, a constant change in appearance and mood. Shakespeare compared this image with a woman, capricious and changeable. Edgar Poe is far from associating human nature with the restless sea, but he is also guided by the view of the sea as a constantly changing space or even a symbolic organism, the soul of the planet.

The second level is the sea as a haven for demons. This level also has a long mythological history. Almost all ancient nations regarded the sea as a space close to our conception of the underworld. That is why in most cultures the ability to “walk on the water” was considered to be a sign of higher, divine origin.

The third level of the symbolism of the sea is identifying it with time which constantly moves and cannot be delayed, stopped or slowed down.

The Image of Night

Another image that is close to the image of the sea is night, a “dark night”. The semantic layers of this image are also similar to the previous ones, at least in the author’s view. Besides, night is associated with painful thoughts, with confusion and even with a feeling of inner tragedy. In addition, the author believes that these feelings can be considered quite universal, because all people react to darkness (and storm) in a similar way.

So, night for the author is the time when the “dream of life and light” retreats before gloomy reality. However, darkness does not mean hopelessness. It’s just a space where a person does not have power and cannot control anything. However, for many modern people this space (or situation) can be regarded as a real hell.

There is one more element that may be important for understanding the image of night. In the very last line there is a mentioning of “Truth’s day-star”. Does it mean that the author believes that Truth is a prerogative of day? In this case, one can also consider a large philosophical plan related to the notions of truth which is often associated with light, whereas night and darkness are its opposites.

The theme of loneliness is one of the most acute in the author’s creative work. Loneliness as a rejection and at the same time a difficult path to perfection appears in almost all his works. It was loneliness that “Hath cheered me as a lovely beam A lonely spirit guiding”. It is just being free from other people’s influence and being alone that a person can find the only possible way from the past to the future, from their mistakes to the perfection of truth. This path is painful, and in many of his works the author complains of the painfulness and shares his saving, but unachievable dreams of joy, tranquility and light-heartedness.

The theme of loneliness in Edgar Allan Poe’s creative work can be interpreted in the context of existential philosophy. Then it makes it possible to combine the above-listed images the poet loved so much into a single picture of the world. The world in this picture is a way out of darkness and the power of the demons of night and the sea to the light of truth. However, the author himself questions the reality of this picture of the world. Generally speaking, he offers the concept of a dream within a dream. According to this concept everyone is free to determine whether there is more light or darkness in their objective reality.

The author does not insist on the verity of any of his concepts. 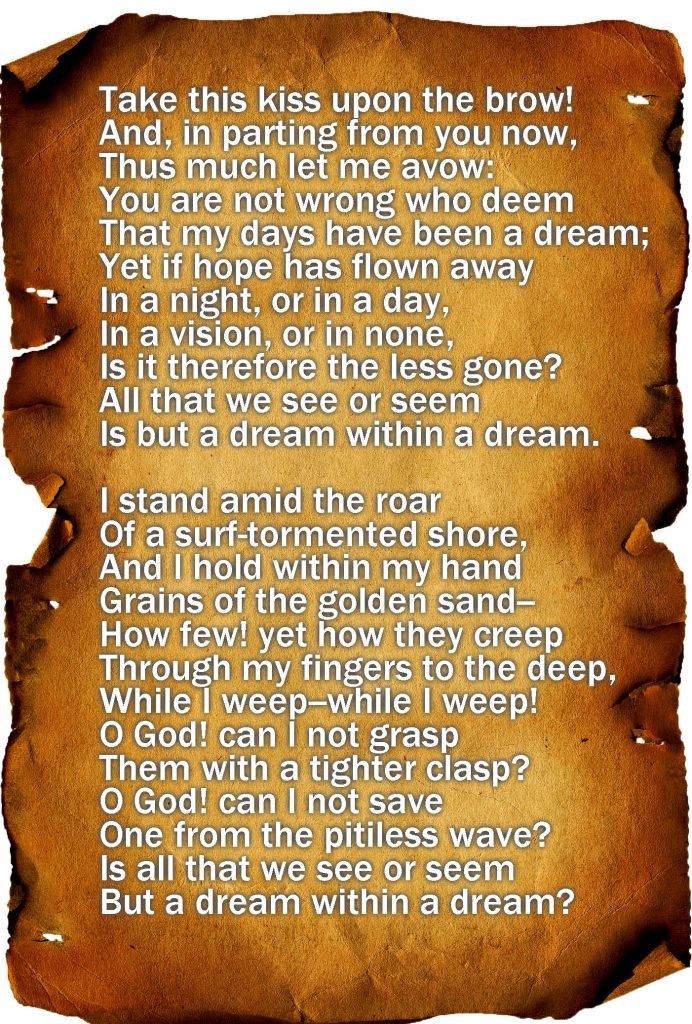